A book by Bert van Manen 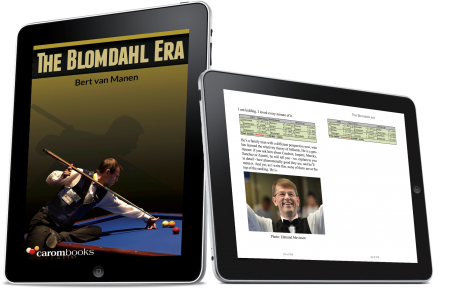 Link to the iBookstore

„The Blomdahl Era” is a series of essays about the modern 3-cushion game. It is a small encyclopedia, with records and tournament results. It’s a who’s who, with player portraits and bio’s. It’s an instructional book as well, it will improve your decision making. Last but not least, the anecdotes will make it a joy to read.

"The Blomdahl Era" starts in 1986, the birth of professional 3-cushion billiards. The Swede was 2nd to the great Raymond Ceulemans in the early eighties, he's 2nd to Frederic Caudron in 2014. In the years in between, he's mostly been nr. 1. For three decades, no one added more to the game, raised the bar so high, won more World Cup tournaments than Torbjorn Blomdahl. Hence the title of this book. But on these pages, you'll also find stories about Sayginer, Sang Lee, Sanchez, Jaspers, Zanetti, Caudron, Merckx and dozens of other greats. I hope there is a little something for everyone. - Tournament results - Player portraits - Cues, tables, balls and systems - A little instruction here and there - And mostly, my thoughts about the game I love to play, and the players I love to watch. - Bert van Manen

One size fits all

A few years ago, I was watching a match in the Belgian league between two guys named Freddy. Same first name, but in appearance they made Laurel & Hardy look like twins. Big Freddy is six feet four and seriously overweight: a mountain of a man. Little Freddy is five-three on heels, and he only eats on Thursdays. Both are good and experienced players: anywhere from 0.750 to 0.900 I’d say. Out of curiosity, I checked both their cues when the match was over. Same length, same weight.

In a way, this is odd. A hundred or more sizes for jeans, but cues are a one- size-fits-all product. It’s up to the players to come to terms with that cue and learn how to hit balls with it. Which is fine, if you are of average height and build. But it is a lot to ask, of both Freddy’s. To be able to stroke freely (and straight) and aim with precision, they must adjust their hold of the cue and their stance. The degree of bend in knees and elbows, the arch of the back, the head even. No two billiard players are identical in the way they position themselves for a shot. But, as it turns out, most of them manage. Many roads lead to Rome, even some less travelled.

In the execution of a shot, there is very little you can get away with. Movement of the head, lifting of the bridge hand, lateral cue movement: they will ruin your game, prevent progress. Live by the rules, or pay the price. But in preparation for a shot, it seems that different bodies simply MUST do different things. There are rules, yes. But they are so often broken successfully.

There is a Belgian player who’s stance is so upright, his head is 5 inches higher than the average, when shooting. It looks odd, artificial and uncomfortable. Obviously, he never had the luck of finding a proper teacher early in his career, you say? He’s Kurt Ceulemans, son of you-know-who, and he’s a feared competitor with a 1.3 average.

There’s this extremely tall Dutch guy (with a normal length cue), and he has trouble getting low enough for the shot. He does not seem to like bent knees, so he spreads his legs. Far. Trust me, if his feet were any further apart, they’d be in different time-zones. Nobody can shoot like that, you say? He can, ....

Let me tell you about my Mr. Miyagi

Show of hands, who remembers: “Paint the fence, wax the car”? If you have not seen “Karate Kid”, go rent it, it is a little Hollywood gem; a feel- good rather than a fight movie. Pat Morita is Mr. Miyagi, the wise man teaching the teenager, and his methods are unorthodox but effective. I saw one of the sequels the other day, and was reminded of my own Mr. Miyagi: the man who taught me billiards. His name was Gijs Kemp, he died in 1987 aged 58, an unsung hero. None of you have ever heard of him, but I am about to change that.

Gijs Kemp had the ugliest face and the warmest personality imaginable. Quite possibly, those facial features had forced him to develop his formidable social skills. He had no formal education, but industry, common sense and frugality in abundance; worked as a waiter, then opened up his own little liquor store, sold that and built himself a billiard room when he was 49. I walked into it as a 21-year old, and it changed my life.

We (me and my student friends) did not even think about 3-cushion in those days. The room only had two tables, and they were 2.30 x 1.15, much more common in Holland than the full-size 2.84 x 1.42. We used house cues, played the free game, and with an average around 2.5, I beat most of my friends and thought I did pretty well. Little did I know that Kemp, the friendly guy who poured our drinks, was capable of 20 average in balkline 47/2. On the smaller tables, in balkline 57/2 (the equivalent of 71/2), he was a legend, with dozens of tournament victories to his name.

Once Kemp gave me a few pointers on how to play, my average went up pretty quick, and I was hooked. He would say cryptic, fascinating things to me, like: “That right hand of yours is already fine, it’s all about the left now, and the other moving parts”. I spent my every free hour in his room, billiards was like a drug, I could not get enough. I had a thousand questions, ...

Our distorted memory of a phenomenon

See if you can recognize these giants of the game from the very brief description.

- His concentration at the table is the envy of most other top players, his birthdays are more frequent than his unforced errors.

- He is the showman par excellence. With his turbo-charged cue, he can make balls do things forbidden by laws of nature.

- A thinking player, a technician, a master of subtlety, simplicity and 3-cushion finesse.

Before you read on: which one was the hardest to guess?

Let’s start with the easiest one: Nr. 2 is obviously Semih Sayginer. My guess is, not a single reader of this column missed that. Spend a half hour on YouTube, and you’ll find literally dozens of video clips with Mr. Magic flashing that winning smile and producing one jaw-dropping shot after another. I don’t want to get too technical here, but when you watch those artistic shots in disbelief: do realize that several of them are only possible with heavy use of silicone spray on the balls. Even if you have a monster stroke yourself, you would not be able to reproduce this in your club, on old cloth.

Nr. 1 should have been fairly easy also: Dick Jaspers. My crystal ball says we should watch him like a hawk in 2013, because he is going to kick some serious ass. Lost his top spot in the world ranking, got beaten badly by Caudron in the JTC in Spain, did not win a “major” since the Lima WC in 2011. Just the right conditions for him to bounce back. This guy’s career may oscillate, but it is not going to go downhill any time soon.

He is way too good for that, and his spirit is unbroken. Take that little “40 in 11” from last week (German Bundesliga) as a warning sign, okay?

Now how about Nr.3? I probably owe you a cold beer at the bar if you guessed it, ...

Download our free catalogue for Mac and iOS with descriptions and excerpts from all English ebooks.